Charlottesville has a riverfront! Though hidden, inaccessible and
underutilized, it is a potential amenity with appeal to countless City and
County residents and visitors to the area. Nowhere is this fact more
significant than at the East High Street and River Road corridors. Attempts at
reclaiming the riverbank for recreational uses in the form of trails, playing
fields, and both passive and active green spaces, pay obvious dividends in
enhancing the quality of life for residents. Environmental and economic
benefits are likely to accrue as well. Incorporating Best Management Practices
for controlling storm water runoff as part of a river front park will help both
aspects. Less obvious, but tremendously important for the City’s continued
economic health, is the role that such amenities play in attracting a highly
skilled talent pool to a region. Increasingly, employees in the New Economy
are considering the proximity of recreational amenities to job and home as
they ponder multiple employment offers from companies in competing
geographic markets. The degree to which Charlottesville can integrate new
employment venues with such recreational (as well as urban) amenities, the
easier it will be for its companies to compete for talent. This will, in turn,
enhance the City’s ability to retain and expand its roster of New Economy
corporations.–pg 154 High Street Corridor Study December 2000, Torti Gallas and Partners CHK 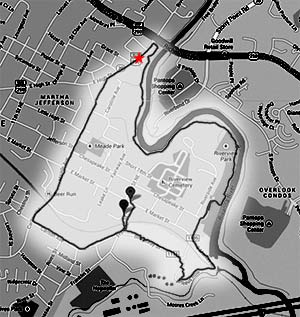