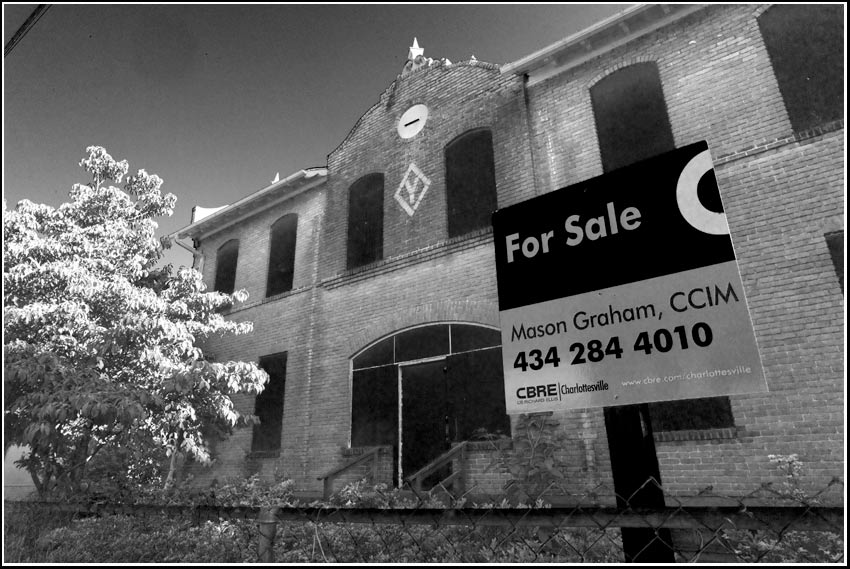 J.S.YOUNG & CO. OFFICE BUILDING ARCHITECTURAL DESCRIPTION
The Young Building is the only example of the Jacobean Revival style in Charlottesville. The basic form of the
building is that of a 2-storey, 5-bay, single-pile structure with a rear addition of nearly equal size. The high
foundation is covered with concrete up to the water table. The walls are veneered with brick laid in stretcher bond.
There are comer quoins of rusticated brick and a projecting string-course. The main block of the building has a
medium-pitched gabled roof, covered with composition shingles, with deeply projecting eaves and decoratively
shaped rafter ends. The great Jacobean gables at the ends of the main block and over the central bay of the facade
are topped with metal finials. The central gable also has metal scroll cresting. A circular attic window in each gable
has been closed. There are two small interior chimneys. Widows are double-sash, 4-over-1 light, jack-arched at
the first-storey level and segmental-headed at the second. Basement windows are very short 3-light hinged sash.
There is no indication, either architecturally or on the Sanbom maps, that the building ever had any sort of entrance
porch, although there was undoubtedly something more formal than the present concrete steps that lead directly up
to the central entrance. The door is flanked by narrow 9-light casement windows, and all have transoms set under
a single segmental arch. Above the entrance, the central bay of the facade projects slightly and is crowned by a
Jacobean gable. This wide bay has two windows with a decorative brick diamond with a “Y” between them. The
hipped-roofed addition covering most of the rear elevation appears to be original and matches the main block in
all details, lacking only the Jacobean gables.–SURVEY OF 18 NATIONAL REGISTER PROPERTIES
AND PROPOSAL FOR LOCAL DESIGNATION Charlottesville Virginia July 1993

One thought on “Individually Protected Property”