Via the stepwise Parks and Rec ten part “Park Master Planning Process” members of the public are halfway to the finish line, the 18th hole, the goal posts, whatever lousy sports analogy you want to employ. Halfway to adoption by the City Council of a McIntire East Park Master Plan.
(One suggestion to P&R, can we take out the qualifier (Master)?
Were there UVA anthropologists/sociologists (or maybe systems engineers or religion majors) in the room February 28, in native dress, doing fieldwork? Extracting the academic relatable lessons from this painful and painstaking process?

Pictured above, Public Mtg. 4, the Venting phase. Earlier in the evening Chris Gensic oriented the Public and answered questions. Following Mr. Gensic the Public was invited to speak. The Public can be characterized in many dualistic ways. Male/Female, republican/democrat, grid/cul-de-sac, old/young, elitist/populist, eggheads/athletes, polemicists/harmonists, tree-hugging/bulldozing, orator/listener, round-ball/no-ball. The binary way of thinking is divisive, but we think like we walk.

And so people stood on their hind feet and said stuff. Mostly flights of rhetoric, emotional pleas, cants and rants. Some information emerged. For the hardy and open-minded, there were things to learn, as least two of the City Councilors dropped by.
NEXT MEETING: Monday, March 26th, 6:00pm at the Buford Middle School Auditorium, Parks and Recreation Advisory Board Public Hearing. 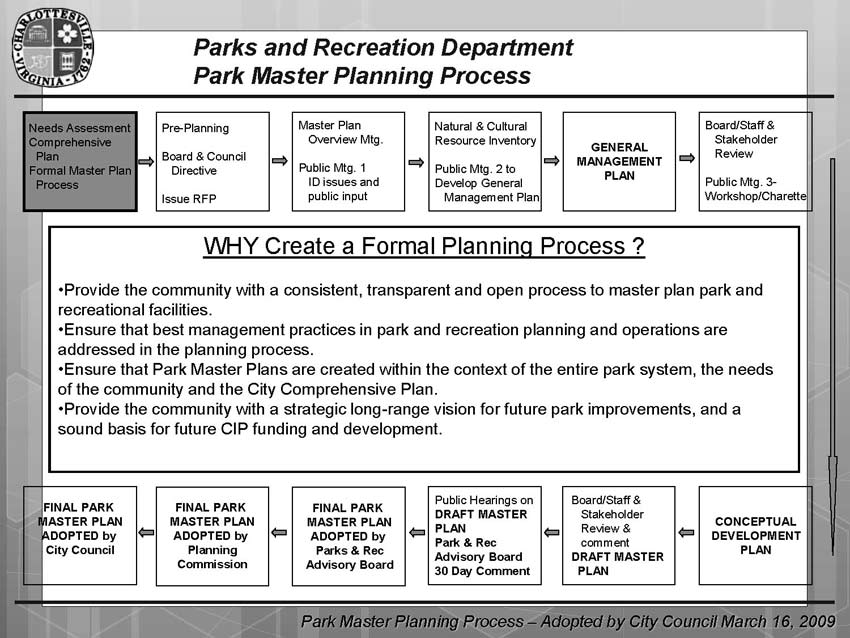 Many of the speakers represented the local chapter of The First Tee™ .
The First Tee™ was established by the World Golf Foundation in 1997 as a 501(c)3. The initial focus was on creating affordable access for those not previously exposed to the game of golf.
The First Tee™ headquarters is located in the World Golf Village, a 6300 acre real estate development (almost the size of Charlottesville). The World Golf Village is located South of Jacksonville Florida in St Johns County, I-95 south to exit 323, then take the International Golf Parkway.
As of today March 2, 2012 the average home price for homes for sale in World Golf Village is $270,214,
The First Tee™ headquarters gets a walk score of 46, it is located in a suburban landscape.
Honorary Chair of The First Tee™ is President George W. Bush. Former honorary chair was President George H.W. Bush.
The mission of The First Tee™ is “to impact the lives of young people by providing educational programs that build character, instill life-enhancing values and promote healthy choices through the game of golf.”
The life-enhancing “Nine Core Values”:
– Honesty, Integrity, Sportsmanship, Respect, Confidence, Responsibility, Perseverance, Courtesy, Judgement.
The CHO Chapter of The First Tee™ has been chartered since 2004 and is one of 202 Chapters operating in 46 states and five countries.

Charlottesville Tomorrow has the story

One thought on “Teachable Moment”